If you manage Google Ads accounts, you have likely added ads to ad groups and checked their performance over time. It is generally a good idea to have two or three ads in an ad group, running at the same time. Then you can compare them, pause the ads that are not performing well, then introduce new ads.

However, you may have noticed that ads are not always shown equally during a given period. Even if they are, there is often not enough data to determine that one ad is actually better than another. Since we are really looking at a sample, the outcome is not exactly definitive for the population.

Another issue is that you likely have a number of campaigns, with a number of ad groups. That leaves you with a lot of ads to review and determine which ones should be paused (so you can introduce new ads). A corollary to this function is what type of new ads should be introduced – that’ll be for another post.

At the heart of successfully managing media is analytics. In other words, your media success is in proportion to how deeply you utilize your data to make decisions. To that end, in this post I’m going to show you how to create an R Shiny app to run through your ads and display a list of ads that should be paused based on a statistical analysis.

The first step is to get access to data through Google Ads api. To do this you must set up an MCC (My Client Center) account. This is a must if you are an agency handling multiple accounts (you should know that if you are) as well as those that are only handling a single account internally (we’ll call that account the client account). Once you have set up the MCC account, connect to the client by sending a request for access using the account id.

It generally takes a few days for you to receive a confirmation for your Basic Access api request to be cleared. Once it does, we’re ready to build our Shiny app.

I’m going to do this as a single file R Shiny app with a single (client) account, just to simplify the process. Because of that, I’m going to hard-code the account id as a variable. If you have multiple accounts, you can use a drop-down to make a selection or retrieve all accounts and output the list with the account.

To start, here is our global variables:

This will load al the packages we are going to be using, plus setting up authentication for Google Ads. Sys.setlocale() may not be something you need to use, but it has solved issues for me, so I always include it.

Next, you will need a UI to interface with. To do that we set the ui to fluidPage(), which we’ll call at the end, to run the Shiny app. I set the theme to “lumen” because I like that theme. There are many others. We then add our rows and columns.

As you can see, there is just one row – a fluidRow(). That is because this is a rather simple UI. The columns can range from 1 to 12. So we are using 3 column spaces for the inputs and 9 column spaces for the table output. There is also a title. In this case, I’m using “Google Ads: Under Performing Ads”.

The inputs are the date range you want to use to calculate performance. Keep in mind that the way I have programmed this, it will only eveluate the ads that are currently running. The reason for this is that you don’t want to pause those ads, only to see them again and again in the output. So, I would recommend a recent date range to review.

In the UI, you can also choose to calcuate performance based on CTR or Conversion Rate. Either of these KPIs would be from Google Ads. You may be using Google Analytics to capture transactions, but those will not show up in Google Ads unless you have configured your conversions to include GA transactions. Generally, I would recommend that approach, but you may be using a Google Ads pixel. Just check that your conversions are correct, or none of this will matter. CTR is a lot more straight forward, but has less to do with final results. You can also set up other conversions in GA or through a Google Ads pixel and use that in your Google Ads conversions.

There is also an actionButton. Without this, every time you updated one field, but before you were done, the app would run and try to retrieve the data. The actionButton allows you to update the dates and CTR/Conversion Rate options, then fetch the data.

Finally, there is the output – DT::dataTableOutput() – which outputs a table with the underperforming ads.

The server function is going to be inside a function called shinyServer(function(input, output){}). I’m going to go through this one piece at a time. At the end of this post I’ll have a link to the Shiny file in full.

To start, I’m going to use a function called ad_data(), in which I’ll pass the begin/end date, the Google Ads account id and whether to calcuate performance based on CTR or Conversion Rate. I’ve added a lot of comments in the code (I’m not usually this verbose in code comments – but this is a way to understand the code), so read through those to understand what is executing and why.

The last thing that we need to do is to create the data table that will display a list of ads that should be paused. The cool thing about this app is that when you pause the ads, they will not be considered again, next time you fetch the data.

You’ll see that there is not a lot to do here, since most of the work has been done already.

That’s about it, however, you do need to call the app with:

Now you have an app that will list the ads that need to be paused because, statistically, they are not as good as top performing ad in the given ad group. This is better than just eye-balling the ads to guess poor performers and it scales. With some additional programming, you can scale this to numerous accounts.

It would seem that automatically pausing those ads would be a good idea. However, I’m not sure about that. I think you want to study the good and bad performers and figure out why some ads are performing better than others. Then pause the poor performing ads and introduce new ones based on what you learned.

You can find the full code to this app on my GitHub @ https://github.com/daranjjohnson/underperforming_google_ads.

To see a working example of the app, click here. This sample app is hosted on shinyapp.io and changing the dates does not change the data. However, which ads need updating change based on whether you select “Conversion Rate” or “CTR” as to how you want to evaluate the ad performance.

Here is the data used in the app: 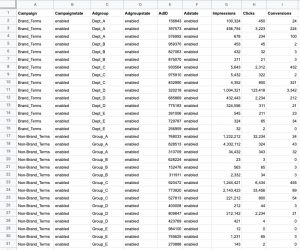 You’ll notice that some of the ad groups do not show up in the list of under performing ads, such as Dept_B under Brand_terms, for both calculations by CTR and Conversion Rate. This is because Dept_B numbers between ads are too close to call. For some ads it will also be because the the number of impressions is too low to determine whether they are underperforming or not.