Not everyone needs to be concerned with multi-channel attribution. If it makes up a very small part of your business, it might not be worth it. However, if you want to get a better understanding of the value of your traffic channels and the transactions/revenue they bring in, you might want to give it a go.

Using R Shiny to pull the raw data out of Google Analytics and create an app is one way to be able to explore your multi-channel attribution traffic channels. You might be asking yourself “if Google Analytics already provides this, why do I need anything else?”. That’s a good question and the answer is that Google Analytics will only calculate aggregated data over a single time period, not over a number of time periods. You miss out on trending over time.  A second reason is that by building your own multi-channel app, you can decide how you want to calculate credit for each channel in the mix and you can see the credit calculations for yourself instead of having to rely on Google. In this app, I have given each channel equal credit. You can change this up by coding additional calculations – maybe even try a Markov Model.

I’m going to walk you through how to create a multi-channel attribution Shiny app using Google Analytics data in fifteen steps. It’s a bit advanced (believe it or not, it was the first Shiny app I created) but I will do my best to explain as much as I can and I will leave a Github link to the full, functioning (mostly – you do have to add your own Google Client ID & Secret) code as well as a link to a functioning app with sample data.

To get a Google Client ID and Client secret, go to console.cloud.google.com. You will need to navigate to the OAuth consent screen. The User type is usually set as external. There are a couple other questions, such as setting user cap and token grant rate. Once you have finished with the OAuth consent screen, navigate to Credentials. You need to create an OAuth 2.0 Client ID. Simply click on “Create Credentials” at the top of the screen and select OAuth client ID. Name the ID and save. You should see your Google Client ID and Client secret in the upper right-hand column.

What I like to do from here is create a YAML file to store the IDs. It makes it easier to manage all the IDs for different data sources and they aren’t hard-coded into the app. A YAML file is simply a text file with a .yml extension. It’s easiest if you use the config package to access the YAML file. If you choose to use the config package, you’ll need to name it config.yml. Here’s what the file should look like inside (I’m using “GA”, but you can use “default”, it which case you won’t have to name the reference in the config::get() statement):

Now that you’re setup with a Google Client ID and Client secret, as well as a YAML file, we’re ready to program a R Shiny app. We’re going to setup some global information for the app. To make it a little less confusing, I’m going to make this a single file app. It can be split into a global.R, ui.R and server.R, if you want. That makes sense with large apps.

We want to load the R packages we’re going to be using and load the Google Client ID and Client secret:

To create the user interface, you need three basic things:

This is section with the most code. We’re going to create this section, then get to work on a function to move from one time period to another, since we are using a time-series graph. This is the basic statement for the server:

All the code we will write will go between the curly brackets. The first function will be used later, but it’s vital to move from one time period to the next:

This is the main work horse of the app. I’ve named it g_mca_data and it’s a reactive function to loop through the time periods, retrieving the multi-channel data for each and working through each dataset. A reactive function has global scope and only needs to be refreshed if the inputs change. We’ll be passing in the begin date and end date, which is the stop date for the function. We’ll also be passing in the time loop (whether the data should be retrieved by week or month) as well as the Google Analytics view name. Here is the code that will get the view id, end date for the first loop, and the setup for the loops:

As you can see, there are eight parameters. Some are fairly obvious (start, end) while others are not. The ga_id is the view id of the view from the property that you want to pull the data from. The metrics, in this case, are the number of conversions and the value of the conversions. Here, I am using the ecommerce transactions and value of the transactions. I’m also pulling in all the campaign combinations (campaignPath) that lead to conversions, each separated by a “>” (e.g. google / cpc > google / organic).

In this script, I want to know how each campaign performed – however, not every traffic source has a campaign attached to it. So I am also pulling in all the source/medium combinations (sourceMediumPath), each separated by a “>” as well. Next, I will take these two and merge them together.

Loop through the the dataset, calling the merge_source_campaign() function above. This will merge each of the source/mediums in the sourceMediumPath with the corresponding campaign in the campaignPath.

Step 8: Remove Source/Medium/Campaigns That Should Not Be Credited For Conversions

We can drop the sourceMediumPath now, since it has been merged into the campaignPath. Also, we’ll remove direct visits that are not at the beginning of the string. This is because of the way I am thinking about multiple channels. If a visitor is coming back directly, the credit is going to the previous channel. If direct is first (it’s their first visit), then it is likely that they heard about the site somewhere offline – so we keep that one. You can manipulate this as you like. You have the option to credit sources/mediums/campaigns in the way that you think is right for your business.

Step 9: Calculate Number of Source/Medium/Campaigns For Each Set of Conversions

Step 10: Separate Each Source/Medium/Campaign Into Their Own Rows

Group all the campaign_paths together and add all the fractions of conversions and conversion values to get the totals for each source/medium/campaign across single channel as well as multi-channel attribution.

At the end of each loop, you want to add the beginning and ending dates, add the data to the final dataframe that has all the time periods, and move to the next time period:

That is the main section of code for the app and most of the ga_data_frame() function. There is still more to do, but this is where the heavy lifting ends.

To extend this just a bit, we separate out the source, medium, and campaign into their own columns, so that those can be rolled up separately (this is where the “–” comes in handy). I also changed the campaign_source_conversions to integer to round off the fractions.

Now that we have the data for each time period, we need to summarise it for the pivot table. To do this, we are going to simply take the dataframe returned above and summarise by either week or month. I’ve called this function mca_data_out and here is the complete function:

We will use Plotly to create the time-series plot:

We will use rpivotTable to create the pivot table. This is a great function. Once the table is served, you can change the value inside to the table to be percentage of rows/columns or counts, etc. You can also remove source/mediums and filter by other variables that are passed in.

So, in fifteen steps, you can create a multi-channel attribution Shiny app. 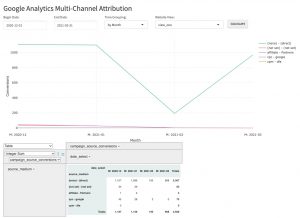 There are things that you might want to change (like the multi-channel attribution calculation, if you don’t like mine). You could even rewrite this to get data day-by-day, then aggregate as you like, without having to refetch the data. You may have also noticed that the output only uses the transactions and not the revenue. You can change that around, or when you are fetching the data, use a different conversion from GA.

You can check out the app with sample data from the Google Demo Account by clicking here to a shinyapps.io hosted version of the sample app.

I hope you enjoyed this post and it got you thinking about how to use Shiny apps to take GA to the next level. Here is the Github link to the full app code: https://github.com/daranjjohnson/multi_channel_attribution_ga_shiny